As Edgewater Councilman, whether it was planting a tree with our schoolchildren on Arbor Day, participating in the annual coastal clean-up, enjoying our summer concerts in the park or being an active participant in council meetings, my priorities have been to promote a high quality of life for our residents while working to keep our taxes consistently amongst the lowest in Bergen County. I have been a resident and homeowner for over 25 years. I am married and have two daughters. My younger daughter attended the Edgewater and Leonia schools. I am proud to say that I have participated in the transformation of Edgewater to a premier Gold Coast Riverfront community.

During the pandemic, I voted in favor of expanded business hours and extension of outdoor venues for our local restaurants. With Dolores Lawlor, I escorted seniors and other residents to Palisades Medical Center for the administration of over 1,000 COVID vaccines on the Edgewater free shuttle bus.

I recommended and voted for funding for new safety equipment and trucks as Council Liaison to the Volunteer Fire Dept, to protect our members and ensure the safety of our residents. In my role as Council Liaison to the Volunteer First Aid Squad, I worked to expedite the re-design and completion of their new quarters in historic old Boro Hall. I voted to approve the master plan in 2014 as a Planning Board member. As a Shade Tree Board member, I am a proponent of utilizing trees and shrubs to further beautify our streets and parks. I was responsible for obtaining grants for the repaving of Edgewater roads as a representative for the South Bergen region of the Bergen County Community Development office.

I will continue to be an active council member, attending all meetings and local events, focusing on sound decision making and completing work started in 2020 with the Hudson River Waterfront Conservancy to create a safe and connected waterfront walkway for all Edgewater residents.

I am committed to this town and will work even harder to keep Edgewater the premier Gold Coast waterfront community it has become as a result of good planning and effective leadership. 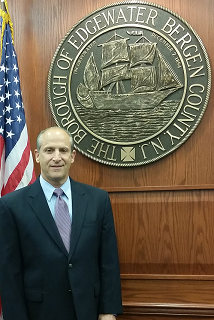 Rinaldy “Ray” Gutierrez has been a resident of Edgewater since 2013 where he is raising his son and daughter. Ray has been involved in the Edgewater Recreation Department and the American Youth Soccer Association coaching children in basketball, baseball, and soccer. He is also passionate about his service with the Dinner Program for the Homeless with the Holy Rosary Church.

Ray has been employed in IT for over 22 years. His career has included employment at companies such as Hewlett Packard, Deutsche Bank, Hitachi and Dell Technologies. He earned his BS Degree in Engineering Technology from New Jersey Institute of Technology.

During his spare time, Ray’s top priority is spending time with his children. He also enjoys running, golfing, and cycling, especially around town with his best friend, an English Bulldog named Blu. 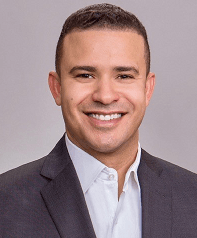 
Dolores Lawlor is a life-long resident of Edgewater, having lived in this town for 80 years. She is a former member of the Edgewater Colony residential complex board. Dolores is a retired nurse, having worked at Holy Name Hospital for many years and retiring from Palisades Medical Center after 18 years of service. In retirement, Dolores worked on a per diem basis at a local nursing home.

During the pandemic, Dolores worked with the Boro and Palisades Medical Center to transport, via free shuttle service, Edgewater seniors and other residents to obtain COVID vaccines. She accompanied the shuttle and expedited vaccine administration so residents could be vaccinated in their seats and not have to leave the shuttle bus. In total, over 1,000 vaccinations were administered. Dolores will spearhead the relocation of the Borough’s Health Dep.t to the renovated historic Boro Hall alongside the new Senior Center.

As the Council President, Dolores is an active participant in all borough events and meetings. She is one of two borough representatives for the South Bergen region of the Bergen County Community Development office and was successful in securing grants for repaving of town roads. As the Council Liaison to our senior citizens, she supports the senior events in town, like the annual picnic. Dolores participates in the Annual Coastal Clean-up which takes place in September. She is an active member of the Edgewater Housing Authority and the Edgewater Drug Alliance. Dolores is the Council Liaison to the Building Department, Health, Welfare and Court.

Dolores has a daughter, Kathleen, is a Yankees fan and enjoys spending time with her grandchildren. 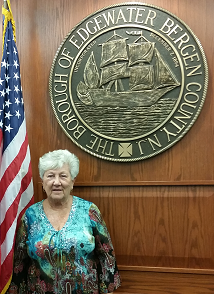 Vincent J. Monte is a very active community member and has been a resident of Edgewater for over 25 years.  He and his wife Christine have two children, Vince and Alexa. Vincent, also known by family and friends as Vinny, participated as a little league baseball coach to 7th & 8th grade youths.

Mr. Monte has worked for over 30 years as a service manager/coordinator in the compressed air field and is currently employed by Scales Industrial Technologies of NJ in Woodland Park.

He is a graduate of Kean College and holds a Bachelor’s Degree in Management Science.

Vincent is a sports enthusiast that has been involved in high school and recreational sports groups; his love for football, golf, baseball and basketball has been an encouragement to the youths in our community.

Mr. Monte is a family man who keeps a caring eye on the elderly in our community.  He always makes an effort to be there to lend a helping hand, shoulder or a just an ear to just listen. 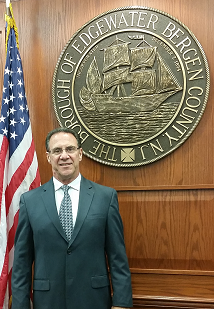 
Lou Vidal is devoted to finding innovative solutions for the betterment of Edgewater.

A long time public servant, Lou has served the Borough of Edgewater as Council member for six years, during which he has worked to reduce expenditures and save taxpayer dollars. He implemented best practices for managing the Borough’s budget by using historical data to better understand and predict spending patterns.

Lou brought the staggering costs of the Borough’s health care and police overtime to the forefront of budget discussions and is setting the path to lowering those costs. He also uncovered deficiencies in the tax assessor’s office and encouraged the council to replace personnel.

After Superstorm Sandy in October 2012, Lou went to Trenton and testified before the Senate Environment and Energy Committee to fight for legislation to help restore storm ravaged walkways along the Hudson River.

As council president for two years, Lou served as acting mayor after the untimely passing of Mayor Nancy Merse. He handled the transition period diplomatically and appointed James Delaney as mayor.

Prior to living in Edgewater, Lou served as councilmember for Palisades Park, including two terms as council president. He is a member of the Association of Financial Professionals and is currently enrolled in a graduate program at Farleigh Dickenson University, where he earned his undergraduate degree in business. His professional experience in business includes banking, international trade and real estate development and planning. 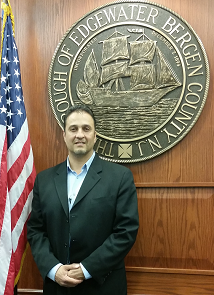