Alert NY Waterway Port Imperial Service has been Suspended! Read On... NY WATERWAY SHUTTLE BUS FROM THE EDGEWATER LANDING TO PORT IMPERIAL HAS BEEN SUSPENDED Read On...

With the constant flow of information taking precedence on our homepage, we realize our Borough Calendar is harder to find. Please Click Here for the Calendar,

EXECUTIVE ORDER NO. 114 WHEREAS, the COVID-19 pandemic continues to spread around the globe, with some reports indicating that there are now over one  million cases of COVID-19 worldwide and over 245,000 cases in the United States; and... http://edgewaternj.org/DocumentCenter/View/6055/04-03-2020-Executive-Order-114 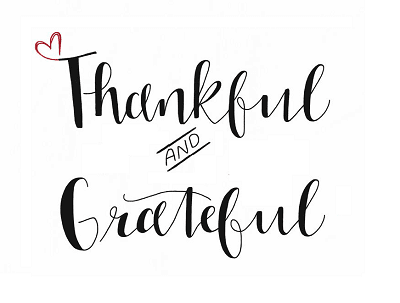 COVID-19 Update: Bergen County as of 4:00 PM Thursday, April 2, 2020
4269 total presumptive Positive Cases identified as per the CDRSS system; impacting all 70 municipalities. **
We have sadly lost 120 of those residents and the County of Bergen mourns their loss and offers condolences to their loved ones.
**Please note that numbers may vary due to varied reporting times from both the State and local municipalities; as well pending case verification and/or county attribution by NJDOH

AG Guidelines COVID-19 Medications... Limitations for prescribing and dispensing of medications for treatment of Covid-19.

3708 total presumptive Positive Cases identified; impacting all 70 municipalities. ** We have sadly lost 75 of those residents and the County of Bergen mourns their loss and offers condolences to their loved ones. **Please note that numbers may vary due to varied reporting times from both the State and local municipalities; as well pending case verifications and/or county attribution by NJDOH... 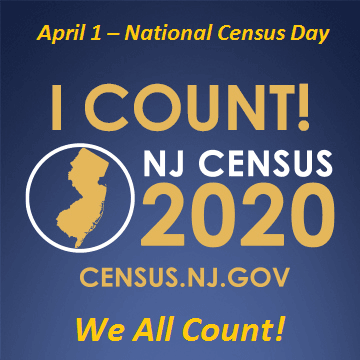 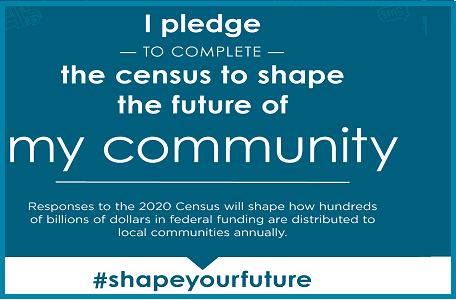 The 2020 Census is happening NOW. You can complete your questionnaire online, by phone, or by mail.
https://my2020census.gov/

It’s quick and easy. The 2020 Census questionnaire will take about 10 minutes to complete.
It’s safe, secure, and confidential. Your information and privacy are protected.
Your response helps to direct billions of dollars in federal funds to local communities for schools, roads, and other public services.
Results from the 2020 Census will be used to determine the number of seats each state has in Congress and your political representation at all levels of government.

Where: The county operated site is located at: Bergen New Bridge Medical Center at 230 East Ridgewood Avenue, Paramus, NJ.  This is an APPOINTMENT ONLY site. Who: This site is open to Bergen County residents who are symptomatic; this site will continue to serve first responders and healthcare professionals who live or work in Bergen County as well.   Symptomatic Bergen County residents, first responders or healthcare professionals must provide photo identification proving their residency and/or professionals to provide qualifying photo id.   How: OPTION 1. Residents must first screened by completing a brief survey located at https://www.newbridgehealth.org and evaluated by a Telehealth doctor. Patients will then be given a confirmation code number to present at the drive-thru testing site that corresponds with their appointment. OR OPTION 2. Patients with orders (prescription) from their private physicians have expedited scheduling. Log into portal http://smtp2.co.bergen.nj.us:32224/?dmVyPTEuMDAxJiY2ZjcwMWUzNzFkOTdkMj Q1ND01RTgzODUyNl82Mjg5MF8xNjEzMV8xMyYmOGEwOWQzNjYwM2E5YTljPTE xMzMmJnVybD13d3clMkVuZXdicmlkZ2VoZWFsdGglMkVvcmc=. Follow link to COVID screening and follow prompts to upload a doctor’s order (prescription) into the system. More information is available at: https://www.newbridgehealth.org and at https://co.bergen.nj.us/ WHEN: By appointment 7 days a week *** Please note that this is a County operated site and is separate from the FEMA site located at Bergen Community College in Paramus.

Families First Coronavirus Response Act: Questions and Answers
As provided under the legislation, the U.S. Department of Labor will be issuing implementing regulations. Additionally, as warranted, the Department will continue to provide compliance assistance to employers and employees on their responsibilities and rights under the FFCRA...

Do you receive SNAP Benefits?
Many SNAP households will receive additional benefits in March and April to help them buy more food during this public health crisis. Extra March benefits will come this Sunday, March 29.
https://www.edgewaternj.org/DocumentCenter/View/5988/03292020-SNAP-Benefits-COVID-19

List for Edgewater Restaurants... Please call to be sure they are open for delivery or takeout first.

This is a message on behalf of Mayor McPartland and the Borough Council to provide a Coronavirus update for Friday March 27.

We have been purposely limiting the telephone messaging to prevent information overload with 24 hour television and radio news updates. However, we have been providing regular updates and information on our borough web site and our Facebook and Twitter Accounts.  We also ask that you please register for our reverse messaging system swift 911 on our web site at http://www.edgewaternj.org/254/Emergency-Notification-PSAs . Provide your land line and or cellular telephone as well as email to receive emergency notifications, you must register for this service.

We ask that all residents adhere to the advice of our national medical professionals by practicing social distancing as well as self-quarantining if you are sick or not so we all do our part in limiting the spread of this virus and hopefully soon see a reduction in cases.  Only travel outside your home for necessary supplies as well as exercise.  Grocery stores like ACME and Shop Rite are well stocked and we continue to ask that you do not hoard supplies that someone else may need.  Many restaurants are open for take-out and delivery and we ask that you please patronize these local restaurants and show your support for our small business in Edgewater.  If you log onto to our web site and social media sites, we have posted as much financial assistance information for residents and business owners as possible, and will regularly update this.  Another important request is that you please properly dispose of your gloves and masks in trash receptacles and do not throw them on the ground, this is becoming a big problem and littering is not a solution.

Another matter we would like to remind you about is the 2020 Census.  This may seem trivial at this point however, let us briefly explain why it is so important you fill out your census return.  The funding that is being provided from the federal government for the Coronavirus is based on the 2010 census data, the more people we count, the more money that can be distributed to residents who need it.  So please, fill out your census return by paper or logging on to 2020census.gov, it takes less than 10 minutes.

Thank you for your time and stay healthy and safe and if you need any type of help or assistance, borough staff are working Monday through Friday, feel free to email or call us.

For seniors 60 and over concerned about leaving their homes during the COVID-19 outbreak to shop for groceries and/or pick up medication, Brianna Greenberg, Care Coordinator, Bergen County Department of Human Services/Division of Senior Services, reports that Umbrella is available to make sure that everyone is able to get the supplies they need during this difficult time. More Info...

Gov. Phil Murphy and team delivered an update on coronavirus cases in New Jersey at a 2 p.m. press conference. 3/26/20 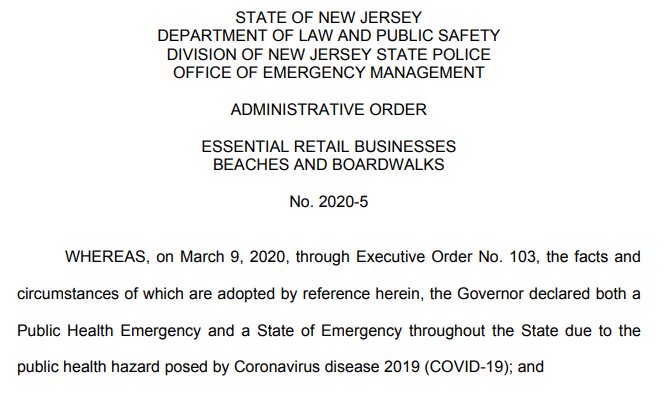 MEMORANDUM
Executive Order No. 107
This order revokes all prior mitigation executive orders, and incorporates or modifies their provisions as described below.
“Stay at home” order: All residents are to stay at home or at their place of residence unless they are leaving for the following reasons:
/DocumentCenter/View/5948/03202020-Summary-of-EO-107-and-EO-108

THE NY WATERWAY SHUTTLE BUS FROM THE EDGEWATER LANDING TO PORT IMPERIAL HAS BEEN SUSPENDED UNTIL FURTHER NOTICE.

From the Office of Governor Murphy:

As per Governor Murphy’s Executive Order # 107 issued on Saturday March 21 the following employees and businesses are permitted to work and operate: Updated List Approved Workers - Landscapers 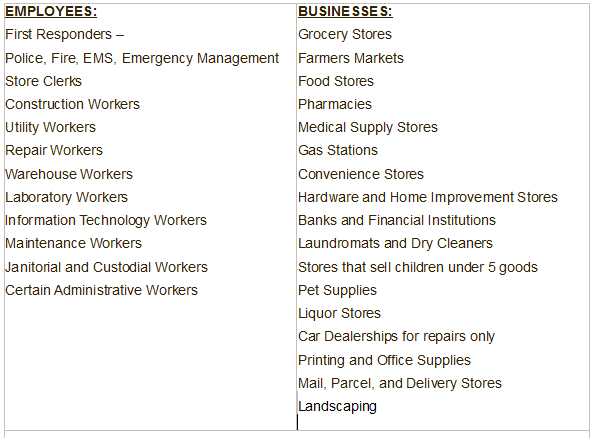 Personal care businesses such as hair salons, barbers, nail salons, and massage can remain open until 8pm March 19 this evening and will remain closed indefinitely.

Planning Board Notice - The 615 River Road Partners Redevelopment application has been adjourned until May 13.

4th Planning Board special meeting is being adjourned. The next regularly scheduled meeting is scheduled for April 8th. 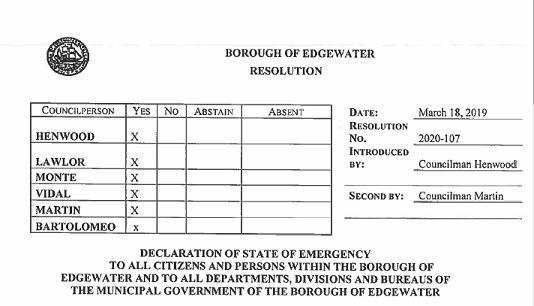 County of Bergen
Executive Order No. 2020-1B Final Version
Pursuant to the authority vested in me under the County Executive Form of Optional Charter Law, N.J.S.A. 40:41A-36 and 37, et seq., and Article 3, Section 3.4 of the
Administrative Code of the County of Bergen, I issue the following Executive Order: ...https://www.edgewaternj.org/…/59…/EXECUTIVE-ORDER-NO-2020-1B

The March 18, 2020 Board of Education Meeting has been 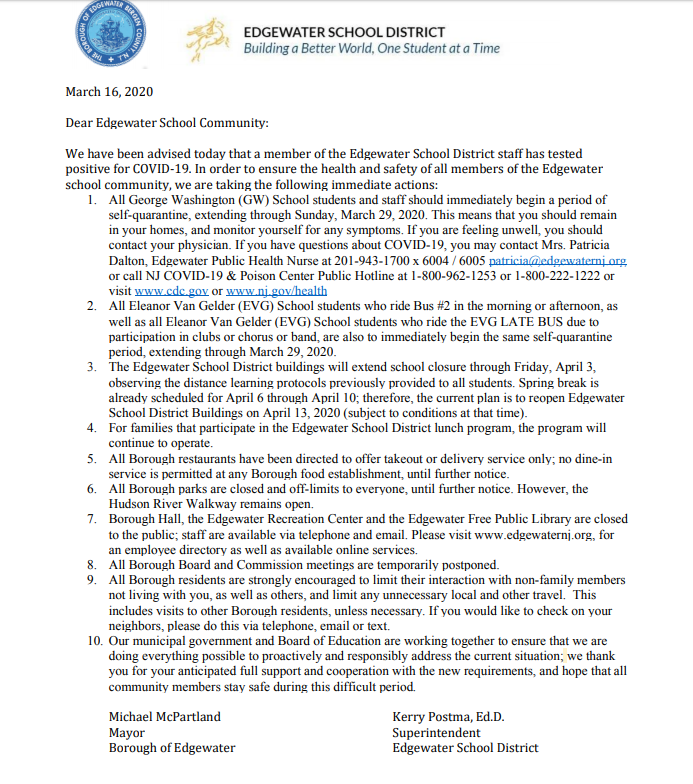 It is very important that residents do not panic during this time, there is absolutely no need to overwhelm grocery stores, pharmacies, or gas stations, and there is no need to stock up on supplies that may lead to waste or the inability of someone who may need the item from getting it. Restaurants are open and residents are urged to go about their lives as normally as possible. During this period of limited socialization, try something that perhaps you have not done before or have not done in a while like try cooking a new dish, reading that on line book you have heard about, going for a walk on the Hudson River Walkway, or even better, have a conversation with a loved one or neighbor. I am urging all residents NOT to isolate yourselves, please reach out to friends and neighbors who you know are alone and see if they are in need of anything, a simple conversation can go a long way at this time. The following temporary policies are in effect until further notice;

1. Schools have been ordered closed which in turn has led to the closure of the library, community center, all playgrounds, and all activities at these facilities. Keeping non-school facilities open defeats the purpose of the school closures which is intended to limit close physical contact providing greater chance for the virus to spread. Playgrounds have been closed because we all know most children have runny noses, sneeze, and cough and the playground equipment acts as a viral incubator. So please keep your children off the playground equipment. Open spaces within Veterans Field are open to enjoy.
2. Because of our inability to maintain an adequate sanitized environment on our fleet of buses, we have suspended the shopping bus routes, the medical transportation service, and the ferry bus routes. As before the virus outbreak, we have always regularly cleaned and sanitized our fleet of buses however, due to the close seating environment of a bus and out of extreme caution and concern to our riders, we have suspended service until further notice. We apologize for this inconvenience but after consulting with medical professionals and our staff, we feel this is best. Many major grocers have free home delivery and many medical providers are offering stay at home services.
3. The municipal courts have been suspended by the New Jersey Chief Justice, all matters before the municipal courts will be re-scheduled. The Edgewater Court will notify all cases by mail and telephone in regard to new court dates.
4. All Borough Offices, Departments, and Operations remain open and ready to serve our residents with new protocols including the Recreation and Health Departments at our Community Center. Residents are urged to call or email before coming to a borough office, many functions can be performed telephonically and electronically. At Borough Hall, you will be sequestered in the lobby and not permitted to enter the building, this is why it is important to “Know Before You Go”, call or email first. Since there is no lobby to be sequestered in at the Community Center, you will be stopped at the rear Health Department door and the front Recreation Department door. Again, call or email before you go. All contact information such as telephone numbers and email addresses are available on our web site edgewaternj.org.